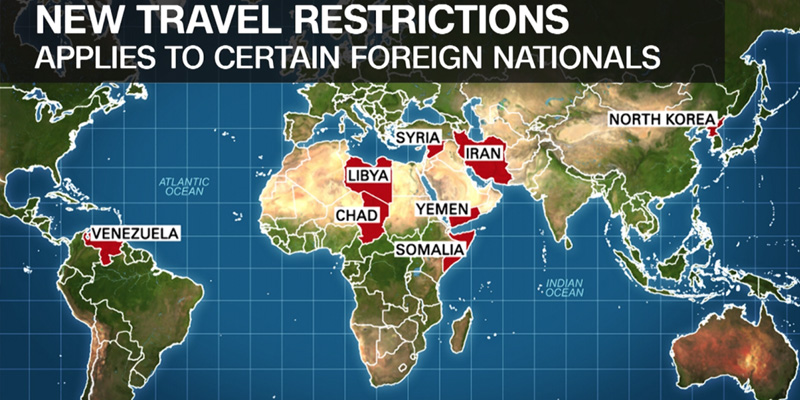 On September 24, 2017, President Trump issued a proclamation outlining a new, revised travel ban. The most recent attempt bears the title “Enhancing Vetting Capabilities and Processes for Detecting Attempted Entry Into the United States By Terrorists or Other Public-Safety Threats.” Unlike the original travel ban issued just after the inauguration or Travel Ban 2.0 from March 2017, the new travel ban is intended to be permanent.

In an attempt to avoid judicial rejection and public condemnation of the travel ban, the latest version was preceded by an assessment of countries whose citizens could pose a threat to national security or public safety. On the basis of that assessment, the Administration concluded that the following countries have been “deemed to have inadequate identity management protocols, information sharing practices” and present other risk factors. The affected countries are: Chad, Iran, Libya, North Korea, Somalia, Syria, Venezuela, and Yemen. Although Iraq was also on the list, it will be treated separately under the travel ban.

The new travel ban includes procedures for exemptions and waivers, mostly for individuals with special, unique or compelling circumstances or those with close ties to U.S. citizens parents, children and spouses. For additional information on the latest travel ban, click here.

The new travel ban will also most certainly be subject to challenges in the U.S. courts and criticism in the U.S. and abroad. Critics will question the extent to which such a ban actually protects Americans from threats to national security and public safety. Proponents will argue that it is better to have an over-extensive ban, than to subject America to risk.

For additional information on how the travel ban may impact you and your family, contact us.

Next Post
USCIS: Employment-based Applicants to be called for In-Person Interviews
Previous Post
Register Now for the 2019 Diversity Visa Program