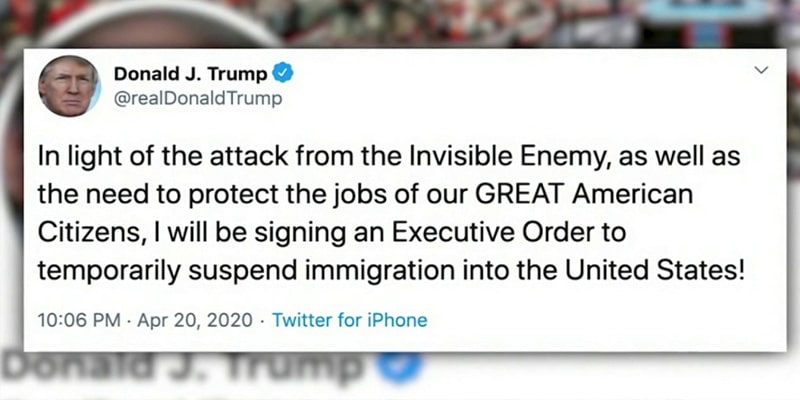 Trump Issues Decree Suspending Legal Immigration: Or Does It?

Not really. Former reality TV star Donald Trump has signed a Presidential Proclamation “suspending the entry of certain immigrants for 60 days.” The proclamation followed a middle-of-the-night tweet in which Trump threatened to get back at the “Invisible Enemy” by shutting down all immigration.

While the stated aim of the proclamation is to protect U.S. workers, in fact it does nothing to protect U.S. workers, or to help U.S. employers or to boost an economy that has been devastated by the Covid-19 pandemic. Rather, the decree is a transparent political gesture which is intended to appeal to Trump’s anti-immigrant base and to divert the pointed finger of blame from the Administration to faceless foreigners. The order takes effect at 11:59 pm EDT on April 23, 2020.

In general terms, the order “temporarily suspends the entry of certain employment-based, family-based and other immigrants for 60 days.” This means that it applies only to eligible persons not yet in the U.S. seeking to immigrate from abroad. However, since the consular sections of U.S. Embassies all over the world are closed and not conducting interviews due to the pandemic, in practical terms, it effects almost no one.

Notably, the proclamation does not affect the filing or processing of Petitions for Alien Relatives (I-130), Petitions for Alien Workers (I-140) or Applications for Adjustment of Status (I-485), nor does it impact applications or petitions for H-1B or TN professionals, L-1 transferees, R-1 religious workers, E-2 investors, P-1 athletes, O-1 aliens of extraordinary ability, F-1 students, J-1 exchange visitors, etc. The proclamation also does not impact or suspend the processing of applications for employment authorization or advance parole or applications to change or extend non-immigrant status. The proclamation does direct U.S. Dept. of Homeland Security and the U.S. Dept. of Labor to study of the impact of temporary foreign workers on U.S. workers and the results of the study could prompt future restrictions on these non-immigrant categories.

• U.S. lawful permanent residents,
• Immigrants who are physicians, nurses or other healthcare professionals, and their spouses and minor children;
• Applicants for EB-5 ($1.0 million investors) visas;
• Spouses of U.S. citizens;
• Children under 21 of U.S. citizens and prospective adoptees;
• Foreign nationals whose entry would further U.S. law enforcement objectives;
• Members of the U.S. armed forces and their spouses and children,
• Foreign nationals seeking to enter as Special Immigrants in the SI or SQ classification, and the spouse and children of such individuals; and
• Foreign nationals whose entry is in the U.S. national interest.

While it sounds scary and it is making people upset and nervous, in fact the proclamation impacts a limited group of prospective immigrants – those who are outside the United States on the effective date of the proclamation and have not been issued an immigrant visa or similar U.S. travel document by a U.S. consulate. It does not affect those already holding a valid immigrant visa or similar travel document, or applicants for adjustment of status to permanent residence, among other exceptions.

For questions on Trump’s latest effort to hurt the American economy by restricting immigration, contact us.